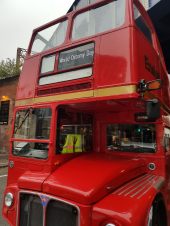 Yesterday, Saturday 6th October was World Ostomy Day (WOD). I celebrated by getting on board the Stoma bus with Colostomy UK, the Ileostomy and Internal Pouch Association, the Urostomy Association, plus lots of awesome ostomates driving around London past all the iconic sights, getting lots of attention, helping raise awareness and breaking down stoma stigmas.

We met at Tower Hill where our double decker open top old London bus was waiting for us, all decked out with banners and placards. Everyone got a white and pink WOD t-shirt and it was all aboard, bound for destination awareness!!!

Just before we headed off the predicted bad weather hit and remained relentless for most of the day, but we had our open top bus, and we were determined to make the most of it! We all started up top, waving our placards under Colostomy UK umbrellas and some plastic ponchos a kindly Big Bus tours driver donated as we went past! Lots of bystanders waved back and you could see were reading the WOD signs, some knowing and others curious what it was all about (and googling on their phones!). 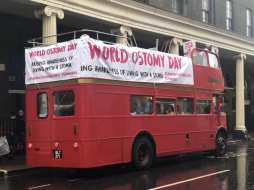 It was great to see some familiar faces of ostomy advocates I’d met at previous events including Shell aka Stoma in a Teacup, Louise from Crohns Fighting and fellow avid traveller Fiona (Winnie and Me and the Wanderlust couple and IBD). I also met heaps of other inspirational ostomates and made new friends too. People had travelled from far and wide, including Ken and double ostomate Bobbie all the way from Berwick-upon-Tweed near the Scottish border, Donna and her ostomy Betty Poop from Yorkshire (whose mum has a Betty Boop tattoo with an ostomy bag in the same place as Donna’s ostomy). Her parents were even wearing ostomy bags filled with soggy Weetabix in support of WOD!! 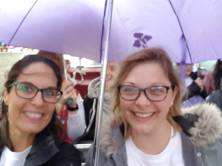 Then there was Annie who was only 2 weeks post-surgery, and the incredibly inspirational Caroline whose book came out earlier this year about training to do triathlons after her ostomy surgery (Loo Rolls to Lycra: The Ironman Dreams of an IBD Sufferer). Who could forget the positive pink haired Polly from Liverpool, Stacey who was along for her first ostomy event and who I recently connected with on Instagram (Stoma Stace), Iffy who had her ostomy surgery after an appendix surgery gone wrong, and the lovely Tracey who recognised me from my Stoma-licious posts and said I was the first person she ever saw getting their bag out!! She introduced me to a couple of the others like this and saying “this is the lady who walks to the top of mountains and gets her bag out”! I was quite chuffed!!! There were so many others who I didn’t get a chance to properly meet or chat to – hopefully next year! 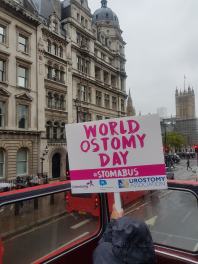 We rode all around London past St Pauls, the Shard, Trafalgar Square and Big Ben, back and forth across the Thames. A lot of us managed to stay up top for a good while, but eventually, soaked through, we mostly decided to take shelter on the lower deck. We didn’t let the rain dampen our spirits though, as we continued chatting whilst waving out the window at the passers-by.

One of my favourite parts of the day was during a pit stop near Charring Cross and one of the few dry spells, I got a #getyourbellyout photo with some of my new osto-mates! Tracey, Caroline and I started the trend, before a few others in the group decided to join in! The Stoma bus initiative and our photo even made it into an Ostomy Connection article about different ways people around the world celebrated WOD! Proud stoma sister moment!

After a brief stop near the London Eye, then a toilet stop mission at Covent Garden, we headed for our final destination, Speakers’ Corner at Hyde Park. A perfect place to end our Stoma bus tour, given the theme of this year’s WOD was Speaking Out Changes Lives. Unfortunately due to the weather (and a World Zombie Day procession taking place across the road!!), there weren’t many people about to hear Scott from IA support give his speech, but that didn’t matter, we were all there!! As a group, we joined together to speak out and show that having an ostomy really can change your life for the better, and so many ostomates do live life to the full after surgery! It was such a fun day that I am so proud to have been a part of. A huge thank you to everyone involved, especially the charities, for making it such a fun, memorable and inspiring day. Speaking out really does change lives 😊 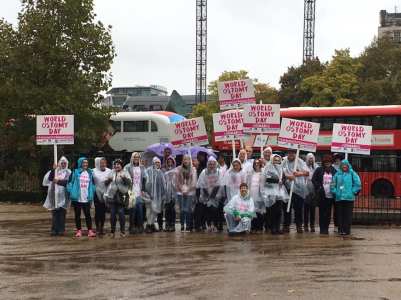 Going with my Gut

A girl with IBD travelling the world

actually, its me & crohns as I'm the star of this show.

My journey with ulcerative colitis and a stoma through life, treatment and fatherhood, with the occasional poem.

Loving what I wear with an ostomy...

My journey with Squirt my Stoma

Blog Days of Janie
The #ModernBaglady

Travelling the world with an auto-immune disease : healthy tips for your round the world trips!

The rambling, trials and tribulations of the life of a twenty-four year old living with a permanent ostomy.

no rain, no flowers.